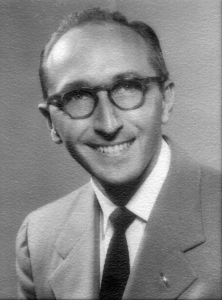 He was born on March 26, 1920 in Canton, WI to William Blanchard and Mabel Lavina (McLellan) Johns.  Bob went to Canton State grade school, attended Rice Lake High School for 2 years and finished High School at Waukegan, IL.  He entered the United States Navy and served during World War II as a store keeper aboard the LSM 41 ship and was later honorably discharged.  He returned to Wisconsin after the war and got his teaching degree at the University of Wisconsin – Eau Claire, graduating in 1953.  He taught high school in Spooner, WI, California and Rice Lake High School teaching history and social studies.  He loved music, especially jazz and big band music and with his sister, Marion played piano at establishments in the Blue Hills.  While in the service he also sang with the Great Lakes Naval Station choral choir and they sang in the movie, The Navy Way in 1944.

In recent years he was very involved in genealogy.  He spent many hours checking and rechecking information and researching the family genealogy.

Robert Johns is survived by his sister-in-law, Beverly Johns of Cumberland, WI; cousins, nephews and nieces.  He was preceded in death by his parents, William and Mabel Johns; his stepfather, Arthur Beardsley; sisters, Violet (Jack) Lahr, Marion (Bud) Hafele; and brothers, Gerald and Donald (Karen) Johns.

Funeral Services will be held 11:00 AM Saturday, November 25, 2017 at Appleyard’s Home for Funerals in Rice Lake, WI, interment will be in the Pleasant Plain Cemetery in Cameron, WI where Military Rites will be accorded by the Rice Lake Veterans Center Honor Guard.  Visitation will be held from 10 – 11 AM Saturday at Appleyard’s Home for Funerals.